From Theodore Maiman’s small ruby laser to ultrafast Ti:Sapphire  laser technology, a solid state laser technology revolution, earning  important roles in scientific research,  engineering, medicine, materials working, and a host of other applications. Laser is a special light with variable wavelength and variable effect on different structures of the eyeball. The effects include ablation, disruption and coagulation. According to the wavelength and effects, the lasers can be grouped as Green laser, YAG laser, Excimer Laser and CO2 Laser. These Lasers are used for different disorders of the eye which range from disorders of the ocular surface to the disorders deep inside the eyeball including retina. There are many diseases which used to remain untreated or had interventrial and surgical treatments. Most of them can now be treated with ease and comfort on day care basis not requiring admission and hospitalization. The Physics, delivery system, uses, effects and after effects of lasers will be covered in the presentation. 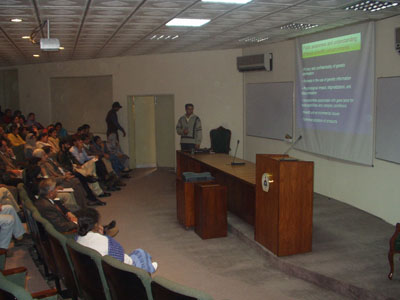 Applications of Biotechnology in Medicine

Biotechnology has affected different aspects of medicine in diverse ways from prevention to treatment. Great progress in new fields of medicine today, is due to recent developments in molecular biotechnology. Recombinant DNA technology or Genetic Engineering as basic tools of molecular biology has revolutionized medical science. The use of biotechnology in medicine is growing rapidly and is opening opportunities to develop new, more effective drugs and other therapeutics. Studying the genetics of humans is allowing us to understand what happens when genes go wrong in inherited diseases and to start to develop new therapies that treat the genetic cause, not the symptoms.