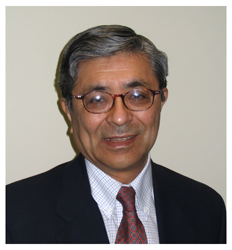 A. Karim Ahmed, Ph.D., is President of the Global Children's Health and Environment Fund (GCHEF), a non-profit international organization based in Washington, DC. In addition, Dr Ahmed is a member of the Board of Directors of the National Council for Science and the Environment (NCSE), where he serves as its Secretary/Treasurer and Senior Staff Advisor.

Previously, Dr. Ahmed was Senior Fellow and Deputy Director of the Program on Health, Environment and Development at the World Resources Institute (WRI) in Washington, DC. On behalf of WRI, Dr. Ahmed helped launch the 1998-99 World Resources Report (WRR) at a press briefing in New Delhi, India in July 1998, and gave a major public address on the impact of climate change on human health at the first Indian National Conference on Environment and Health. (The WRR is a bi-annual joint publication of WRI, United Nations Environment Programme, United Nations Development Programme and the World Bank.)

Between 1974 and 1988, Dr. Ahmed served as Research Director and Senior Scientist at the Natural Resources Defense Council (NRDC) in New York City, where he directed an international program assessing the impact of toxic substances and hazardous materials on the global environment. Upon leaving NRDC, Dr. Ahmed was a senior executive with two environmental consulting organizations — a Principal at Environ Corporation in Princeton, NJ (1988 – 1990), and a Principal and Director of Research and Assessment at Science and Policy Associates in Washington, DC (1992 – 1997).

He has authored numerous publications, including technical books, scientific papers and general articles in the fields of environmental health, risk assessment and on issues related to science and public policy. Dr. Ahmed obtained a B.Sc. in Physics and Chemistry (with highest honors) from the University of Karachi, Pakistan in 1959 and a Ph.D. in Physical Biochemistry from the University of Minnesota in 1969. He conducted basic research in protein chemistry at Harvard University's Biological Laboratories (1963 – 1965) and as a post-doctoral fellow at the University of Minnesota Medical School's Department of Laboratory Medicine and Pathology (1969 – 1971).